Information > To the chiropractor 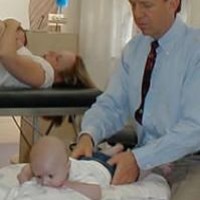 Problems with the spinal column also occur in babies and small children. These occur in many cases during pregnancy, at birth or in early childhood.

A chiropractor treats adults, but also babies, and works preventively from movement of the spine and the skull and its effects on the nervous system. Chiropracty is a supplement to traditional medicine and should not be considered an alternative.

How can these complaints arise
There is almost always a birth trauma. Such a trauma can occur, for example, in a slow or premature childbirth. A delivery by means of artificial remedies or through a caesarean section can also cause birth trauma. If that is the case, there may be a disturbed motility of the skull and / or the spine.

The research
It is important that you inform the chiropractor as much as possible about what is happening to your child. After this conversation, there is obviously a physical examination. During this study, muscle tension, motor skills and mobility are tested. Furthermore, the vertebrae and the skull are looked at. At the end of the study, the practitioner will determine what the problems are and then a treatment plan is drawn up.

The treatment
The treatment has an aim, namely to remove the blockages in the spinal column and the skull. The chiropracter does this by making very intentional movements with his hands.

Of course, the treatments are adjusted according to the child's age. In general, most young children react very quickly. After just a few treatments, there are often major improvements.

The condition of the skin of your child is often a good signifier of their health, and many symptoms of diseases show themselves upon it. Perhaps that rash is a disease, maybe heat rash or an allergy? In the guide below you will find a descripti......
(296837 x) Read more »