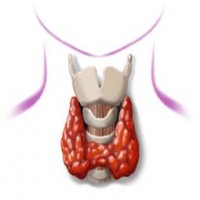 The thyroid is a small organ that lies in front of the trachea. Normally the thyroid gland is not visible or felt.

The thyroid gland creates thyroid hormones. These hormones are important for metabolism (the conversion of food into energy) and thus for growth and mental development.

Hypothyroidism
A slow thyroid gland creates too little thyroid hormone. This is usually congenital, but may also occur at a later age, for example, by thyroid gland inflammation. It is also possible that hypothyroidism occurs because the thyroid is treated with radioactive iodine or operated upon. In the Netherlands and Belgium, about 6 out of 1000 pregnant women have a slow thyroid gland. Usually this was known before pregnancy and these women already had medication. Symptoms of hypothyroidism may be:

In Roman times, they already knew that the thyroid was important for pregnancy. Women in Roman times tied a straw around their throats and if this straw became too tight, or snapped, they knew they were pregnant.

The thyroid is indispensable for pregnancy and works for two at the beginning of pregnancy. That's one of the main reasons why you're so tired at the beginning of pregnancy. For the first 4 months, the fetus is completely dependent on the mother's body. The mammalian thyroid hormone plays an important role in growth, metabolism of all tissues, development and most importantly: the effect on the nervous system.

When there is a (untreated) hypo- or hyperthyroidism fertilization is difficult and sometimes even impossible. In most cases, the menstrual cycle is disrupted in the case of an underactive thyroid gland. This is usually corrected by using sufficient thyroid drugs in consultation with a specialist. As long as you do not use medication that adds the missing hormones, the risk to pregnancy is small.

With hyperthyroidism, the chance of pregnancy is reduced. As with hypothyroidism the risk of miscarriage or premature birth is greater. There is also the risk of congenital abnormality.

The condition of the skin of your child is often a good signifier of their health, and many symptoms of diseases show themselves upon it. Perhaps that rash is a disease, maybe heat rash or an allergy? In the guide below you will find a descripti......
(297224 x) Read more »