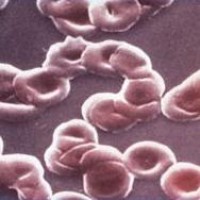 The triple test gives an idea of ​​the chance of having a child with Down syndrome. The test can be performed from week 15 of the pregnancy. With a high probability, amniocentesis may be considered in order to gain more certainty about whether or not Down syndrome is present. The test also indicates whether there is an increased risk of a child with an open spine (neural tube defect).

In the blood of the pregnant woman the amount of certain markers is measured. The protein alpha-fetoprotein (AFP) is one of these substances. In children with Down syndrome, very little AFP is often present in the mother's blood. The chance of having a baby with Down syndrome is calculated from the amount of AFP, the two other markers and the age of the mother. The exact duration of the pregnancy is of great importance.

The result is known after about a week. Only rarely does the test predict the chance of having a child with other chromosome abnormalities than Down syndrome. When there is a lot of AFP in the pregnant woman's blood, the chance of an open back in the baby is increased.

An increased amount of AFP with a triple-test chance also indicate a child with an open back. However, a normal amount of AFP does not provide any assurance that the back is closed.

A favorable result is when the chance is smaller than 1 in 250 of having a child with Down syndrome. With a high probability, for example 1 in 100, the doctor or midwife discusses further research by means of amniocentesis.

Age is a very important factor in the risk of having a child with a chromosome disorder. As the woman's age rises, the chance of having a child with a chromosomal abnormality (for example, Down's syndrome) also increases. The chance of a mutation increases at an age of 35 years and older. Therefore, it is useful to test and discover chromosomal abnormalities early on.

This test can offer a solution for women who do not want to take the risk of miscarriage as a result of amniocentesis or chorionic villus testing.