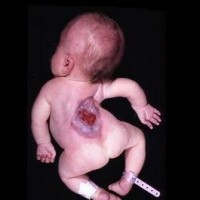 The neural tube is a structure in the embryo, from which the spinal cord and the ceres are formed very early in the pregnancy. In case of a defect of the neural tube, the spine or the skull is not formed correctly. This creates an open spine (spins bifida) or an open skull (anencephaly). These disorders are also often called closure defects of the neural tube.

When there is an open back, this means that a number of vertebrae are not closed properly, a part of the spinal cord is not closed. Children with an open back are usually physically and often also mentally handicapped. When the baby is born with an open skull, it will almost always die at birth or very soon afterwards.

The cause of the open back and the open skull is not yet known. Sometimes there is a combination of hereditary and other factors, such as extremely one-sided nutrition or the use of certain medications during pregnancy, but usually there is no cause to indicate. What reduces the chance of a neural tube defect is taking extra folic acid in the period around fertilization, but that can not always prevent this condition.

The chance of having a child with a neural tube defect does not increase at the age of 36 years or older. This is in contrast to many other conditions.

Sometimes additional amniotic examination can be discussed, for example if the back is difficult to assess, or if there is a greater chance of an open back. A closed defect (this is an open back where the skin has grown over) can not be detected with amniocentesis.

Amniotic fluid research
The protein alphafoetoprotein (AFP) enters the amniotic fluid in small amounts in the urine of the child in every pregnant woman. When there is an open spine or open skull, more of this protein comes into the amniotic fluid. The amount of AFP is therefore greatly increased in the amniotic fluid and this is a clear indication of the possible presence of a neural tube defect.

Blood test
Usually the amount of AFP in the pregnant woman's blood is increased in case of a closure defect. For this reason, blood tests are sometimes done. AFP is also determined in the mother's blood as part of blood tests in the fourth month of pregnancy (the triple test). However, it is already known that blood tests generally give less reliable results than an ultrasound and amniotic examination.

The condition of the skin of your child is often a good signifier of their health, and many symptoms of diseases show themselves upon it. Perhaps that rash is a disease, maybe heat rash or an allergy? In the guide below you will find a descripti......
(297444 x) Read more »