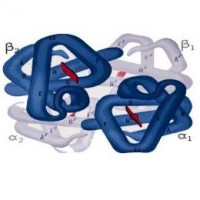 Hemoglobin is a protein that is found in the red blood cells. This protein carries oxygen through the blood. Hemoglobin is mainly formed from iron. In case of a shortage of iron, insufficient hemoglobin can be formed and therefore not enough oxygen can be transported to the pregnant woman and the baby.

A non-pregnant woman has a hemoglobin level between 7.5 and 10. In a pregnant woman, this can drop to 6.3 (this depends on the duration of the pregnancy) without anemia.
Anemia is more common during pregnancy because the demand for iron, folate, folic acid and other minerals and vitamins is increasing greatly. All these substances are important for the production of hemoglobin. The risk of anemia is greater in women who:

Symptoms and complaints
The symptoms of anemia include pale skin, dizziness, headache and chest pain (angina pectoris). Also common symptoms are the rapid exhaustion and fatigue, but these symptoms alone do not always indicate anemia. Many pregnant women can suffer from these, because their hearts have to work harder during pregnancy. It is advisable to discuss such complaints with a gynecologist or midwife.

Anemia and the health of the baby
The body ensures that the baby receives enough iron first and then the pregnant woman. This means that you are more likely to have an iron deficiency than the baby. The baby needs the largest amount of iron in the middle of pregnancy. That is why it is important that you take good care of yourself and get enough iron. Only at extremely low levels of the hemoglobin level does the baby run into danger. These extremely low values ​​occur especially when there is a certain form of sickle disease or Thalassemia. If the cause of anemia is hereditary, then there is a chance that the baby also has anemia.

Complications during pregnancy and after delivery
When women have very severe anemia, there is a greater chance of premature delivery. The birth weight of the baby can also be too low. After the delivery, the blood will become thicker again (this returns to the pre-pregnancy levels) and the hemoglobin level increases. If there is excessive blood loss during childbirth or if anemia was present during pregnancy, it may be necessary to (continue to) use iron supplements for at least 6 weeks after delivery. The gynecologist or obstetrician will regularly check the hemoglobin level in the event of extremely high blood loss. When the woman wants to breastfeed, extra attention should be paid to iron intake. A lot of iron is used in the formation of breastmilk.

Control of hemoglobin
During pregnancy, the gynecologist or obstetrician will check the hemoglobin level. Most gynecologists and obstetricians have a device with which they can directly examine the blood. This blood is obtained by means of a finger prick and the result is known within a few minutes. This result only indicates the hemoglobin level from the blood, if it is too low a more extensive blood test will take place.

Therapy
First, the dietary pattern will be discussed, to make sure you get enough iron from food. Iron supplements are prescribed if necessary. There are rare cases that anemia can not be corrected with oral medication. Then blood transfusions or iron injection may be necessary. At most hospitals, the limit is currently at a hemoglobin level of 4.0.

Precautionary measures
Food is the best source of iron.  Ensuring you eat sufficient amounts of the foods listed below should avoid the need to take any iron supplements.

Liver, despite containing a lot of iron should be avoided, as it also contains high levels of vitamin A. High doses of vitamin A should be avoided during pregnancy. Research has shown that this can be harmful to the baby. Iron from meat is better absorbed by the body than the iron from vegetables.

The condition of the skin of your child is often a good signifier of their health, and many symptoms of diseases show themselves upon it. Perhaps that rash is a disease, maybe heat rash or an allergy? In the guide below you will find a descripti......
(296273 x) Read more »