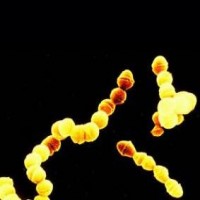 Testing for GBS isn't advisable during pregnancy, as up to 1 in 5 women are carriers.

In certain cases it may be advisable to swab for GBS; for example if a woman is admitted to hospital with premature birth markers; a nurse will take a swab from the vagina and anus, and send this off for testing. Results usually come back in 2-3 days

Streptococci are bacteria, which are only visible under the microscope. There are different types of streptococci. Group B streptococci is 1 of these.

The "B-streptococci" is a bacterium present in many healthy women in the vagina. Often this bacterium can not harm the pregnant and her child, but in rare cases, the baby can be seriously ill by infection with this bacterium.

How often does this occur during pregnancy

GBS occurs roughly in 1 in 5 adults without complaints, 1 in 5 pregnant women carries these bacteria in association with other bacteria in the intestines. They are often also found in the vagina or uterus without any further complaints.

Is GBS something to be worried about?

It is not always possible to prevent an infection of baby by GBS. In situations where the child has a high chance of getting sick, the doctor can take precautions. Sometimes the doctor will give an antibiotic during birth. Reasons for this may be: fever, a previous child who has had GBS infection, or a bladder infection with GBS during pregnancy. Sometimes, after birth, the baby still receives antibiotics from the pediatrician, for example for fever experienced during childbirth. In other cases, it is recommended that the baby be monitored for the first 48 hours. It is rare that the mother needs an antibiotic after birth.

How can a baby become infected?

If the child is infected with GBS in the uterus, the streptococci come from the vagina, through the womb, and thus reach the unborn child. In this way, the baby can be infected and become ill before birth. In rare cases infection and infection occur in the womb "without" the tissues being broken. A quick heart rate in the baby and a temperature increase in the mother can be indicative of an infection.

About half of the children are infected during childbirth when GBS is present in the vagina. Normally, the streptococci do not cause any illnesses, they remain on the skin and mucous membranes of the baby. Only in rare cases, 1 percent, will the child become sick, usually quite soon after birth.

In less than 1/3 of cases, the baby becomes illafter the first 7 days after birth, which is called late onset infection (a late-onset GBS disease). As a result, children may become ill during the first three months of life. Sometimes they have been disinfected during birth, but the disease is created by the GBS bacterium later. In other cases, the child is infected after birth, for example through the hands of an adult. Even when a child is ill later due to GBS, the illness is often very serious.

About half of the women carrying these streptococci transmit them to their child during childbirth. About 20 percent of pregnant women are carriers. As a result, 10% of newborn babies with GBS are infected. The bacteria are present only on the skin or mucous membranes of the child, and the baby does not get sick. Of all newborns, approximately 1 in 1,000 are ill by infection with GBS. Children of mothers who are GBS carriers become sick in 1 in 100 cases. This disease can usually be treated well with an antibiotic.

In 9 out of 10 newborns who do become sick with GBS disease, it occurs on the first day after birth. The child's breathing may become quick and superficial, or even stop. The skin may take on a gray or blue pallor. The baby can feel floppy and hot, and convulsions may occur. A ruttling noise during exhalation serves as an early indicator of infection. Sometimes nutritional problems, like spitting their milk, fever, or being hypothermic can also be symptoms of GBS. Serious illness can result if this progresses to pneumonia, sepsis, or meningitis. Quick treatment with antibiotics is vital, as delays can result in dire consequences.

GBS infection occurs spontaneously. This actually means that during pregnancy or childbirth there was no indication of an increased chance of this disease.


In some cases, these are known risk factors of potential GBS infection