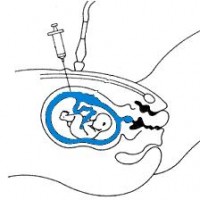 What is a Chorionic test?
During the test, the gynecologist will take a sample of cells, called chorionic villi, from the placenta where it attaches to the uterus.

In general, between 20 and 50 milligrams of chorionic tissue are removed. This is around 1 thousandth of the total volume of tissue from which the placenta is built. The amniotic sac(containing the fetus) will not be damaged.

Almost always the test is done through the abdominal wall. Via the abdominal wall, scans determine the placental position. The test may also be done via the vaginal canal and in these cases the patient should have a full bladder.

Removal of the tissue usually only takes around a minute. The removed tissue is examined directly under the microscope to see if the amount is sufficient for chromosome testing. If there are too few cells a second collection will be taken. The movement of the needle during cell extraction can be uncomfortable.

After the procedure you can go straight home, and there should be no significant blood loss. If you have any doubts, contact your doctor immediately.

Testing via the vagina
Testing via the vagina is performed after the tenth week of pregnancy, usually with a gestation period of approximately 11 weeks. In some hospitals, it's advised not to have sex for a few days before the test Information about this is provided when making the appointment.

During the operation, you will lie in a  gynecological examination chair with your legs in support. After a speculum has been inserted, the sheath is disinfected with iodine. Sometimes the uterus is gripped with tongs. This can be painful.

The doctor will insert a thin tube into the placenta through the uterus's inner wall. A scan takes place. It takes a lot of time before the placenta is reached. Examination of the removed tissue under the microscope takes place immediately to see if the amount is sufficient for chromosome testing.

If there are not enough cells, a second and perhaps third test will take place. Sometimes there is still insufficient tissue. If this the case, the examination will be halted and an abdominal chorionic cell test will be recommended for a later date. The procedure takes an average of 10 to 15 minutes.

After surgery, almost all women have blood loss. The blood loss almost always comes from the uterus, which easily bleeds when touching during pregnancy. Therefore, blood loss is not a cause for concern. Often this will last for a few days, sometimes three to four weeks. This is usually benign.

Almost every pregnant woman returns home immediately after surgery. It is advisable not to have intercourse as long as there is blood loss. Further measures are not necessary. It is advisable to contact the gynecologist if blood loss increases, especially if this occurs in conjunction with abdominal cramps. Even in case of illness or fever the first days after the procedure, it is wise to investigate quickly to rule out an infection.

Outcome
The results of the  test are generally known within 2 weeks. The reliability of the chromosome test in the test is slightly less than that of the amniotic fluid test. This is because 1-2 per cent of pregnancies have a chromosome aberration that may be present only in the placenta. If this is the case, an amniotic fluid test may be discussed.

Risks
The risk of a miscarriage due to this test is 0.5 percent. In addition, every woman who is 11 weeks pregnant has about 2 percent of a miscarriage by the 16th week. This chance is also possible if no test is performed.

Pros and cons of the chorionic villus sample
An advantage of the cvs is that the procedure takes place early in pregnancy and that the result is relatively quickly known, usually within two weeks. If you decide on termination, usually noone even knows you're pregnant at this point.

A disadvantage of the test is that sometimes chromosomal aberrations are found in a pregnancy that may have ended in a spontaneous miscarriage a few weeks later, even before the time of any sac puncture. The miscarriage saves parents in that case the difficult choice about whether or not to end the pregnancy.

On the contrary, the cause of the miscarriage sometimes remains unclear if no test has been done. You also do not know if a chromosome aberration was present with a chance of recurrence in a subsequent pregnancy.

The condition of the skin of your child is often a good signifier of their health, and many symptoms of diseases show themselves upon it. Perhaps that rash is a disease, maybe heat rash or an allergy? In the guide below you will find a descripti......
(295808 x) Read more »