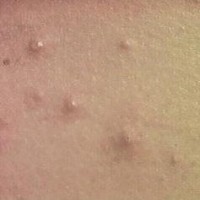 The chickenpox virus is an infection caused by the varicella zoster virus. This disease mainly occurs in young children and usually in a mild form. If an adult gets the chickenpox, then the disease is more intense. Most Westerners get the chicken pox infection as a child and become immune for life.

The varicella-zoster virus spreads through droplets that end up in the air from the mouth or nose of an infected person when they cough or sneeze. People in the area breathe in these droplets and can become infected. Chicken pox can also spread through direct contact with the skin rash of an infected person. Other possible ways of contamination are the joint use of a towel or shaking hands. Normally, people who have had this disease are immune for the rest of their lives.

Symptoms
An infected person normally has 2 to 3 days before the appearance of the symptoms - they may suffer from cold symptoms such as fever, eye irritation, coughing and a feeling of lethargy. As soon as the fever reaches its peak, the rash appears in the form of extremely itchy, small raised spots on the skin, which develop into small clear blisters. It only takes a few hours before the rash has formed in groups on the trunk and face. After this, the vesicles spread over the rest of the body. There may also be blisters in the mouth, ears and nose. When no new vesicles come, the fever disappears. The blisters themselves dry out into scabs in a few days. The virus is contagious to other people from 2 days before the rash appears until all the vesicles have dried.

Diagnosis
The diagnosis is made on the basis of the symptoms and a physical examination of the patient. The blood can also be examined, or a small amount of fluid from the vesicles.

Chickenpox during pregnancy
If a pregnant woman gets the chickenpox virus, the symptoms of the disease are often more severe than in children (this applies to all adults, incidentally). The chance of complications is fortunately small. The same applies to the risk that the mother transfers the infection to the unborn baby (fetus).

The fetus
Pregnant women who have no antibodies (this is only a very small percentage) can become infected. The chance that the infection is transferred to the fetus is, as said, very small. Unfortunately it is not impossible. An infection on the fetus can develop very serious abnormalities, this is called the congenital varicella syndrome. This rare condition is characterized by serious abnormalities, for example, of the limbs (the arms and legs are not well formed and very small), eye abnormalities, scarring of the tissue and abnormalities of the nervous system. Sometimes the baby is stillborn. The baby may also be infected with the chickenpox virus if the mother is infected in the period from 2 days before delivery until 5 days after delivery. This condition is much more common and is called 'neonatal varicella'. In this case, the baby will not be protected by antibodies from the mother (which have not yet been made) and the baby will be given special immunoglobulin.

Therapy
In most people, chicken pox does not need to be treated. If the woman develops chickenpox in the period immediately before or after delivery, the newborn baby must receive an immunoglobulin injection.