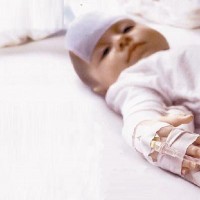 The rotavirus belongs to the family of the 'Reoviridae'. The virus was discovered in 1973, when fluid from the duodenum of children who suffered from a kind of 'winter flu' and had to vomit a lot, was examined under an electron microscope. Rotavirus is the leading cause of severe diarrhea in combination with dehydration. The rotavirus is life-threatening for babies. Because the symptoms resemble gastroenteritis and the general practitioners are not fully aware of the rotavirus, one in 74 infants end up in the hospital in their first year of life, even though there is a vaccine.

The rotavirus is responsible for 40 to 60 percent of diarrhea cases that lead to hospitalization in developed countries.

Dehydration is characterized by:

Drinking plenty of fluids can save a person's life, but does not prevent the spread of the virus.

In case of (serious) dehydration, it is recommended to use a special salt or glucose solution, also known as ORS. Make sure that the water you use is first boiled or comes from an unopened, sealed bottle, otherwise there is a risk secondary infection. If the patient has diarrhea, he must drink a lot, and try to eat dry biscuits or crackers.

General prevention measures include good hygiene practices, such as:

The transmission of the virus can, among other things, be effectively counteracted if staff members of day-care centers or other childcare workers regularly wash their hands. Parents also need to be careful that the nurseries are carefully cleaned and that surfaces that could be contaminated with the virus are disinfected.

Other general precautions to prevent infection:

Do not drink tap water and unpasteurized milk, and do not eat ice cream or unpasteurized dairy products. Be safe: bottles of carbonated soft drinks (especially soft drinks with a taste), beer, wine, hot coffee or tea, boiled water or water that has been cleaned with iodine or chlorine. Do not eat anything at stalls or restaurants that looks suspicious.

There is an orally administered vaccine against the rotavirus available, but this depends on your area of jurisdiction. The UK, for example, provide this free of charge on the NHS vaccination program. In the US this varies state by state.

The condition of the skin of your child is often a good signifier of their health, and many symptoms of diseases show themselves upon it. Perhaps that rash is a disease, maybe heat rash or an allergy? In the guide below you will find a descripti......
(295263 x) Read more »