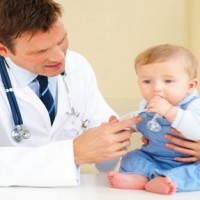 Milk-spitting isn't the same as reflux

Many newborns may spit out or dribble a mouthful of milk after they've been fed. They can drink more than they can handle, and some of it comes right back up.

This little bit of returned is normal, so don't worry about it. As long as your little one has plenty of milk inside him, and the vomiting isn't giving him any issues, you don't need to take any action. The volume of returned milk gradually decreases as he grows older, and should stop anywhere between six and twelve months.

Reflux characteristics
Some babies give much more milk back after feeding than a few mouthfuls. Sometimes in the form of projectile vomiting, with some real pressure behind it. Other babies seem to keep it down but then give a little back even after a couple of hours. They may find it difficult to sleep whilst waiting for some milk to come back out, because it's causing them discomfort.

If baby vomits out milk every day, he may be suffering from reflux. Some of the feed, whatever it may be, flows back into the esophagus from the stomach. This can cause a burning sensation, because it's already mixed with stomach acid, and can be painful just like heartburn is for adults.

Measures to help with reflux
Baby's pain can be reduced by a few simple measures.

The condition of the skin of your child is often a good signifier of their health, and many symptoms of diseases show themselves upon it. Perhaps that rash is a disease, maybe heat rash or an allergy? In the guide below you will find a descripti......
(294715 x) Read more »