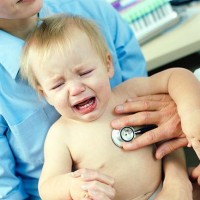 Pseudo-croup (laryngitis subglottica) is a viral inflammation of the larynx and throat (vocal cords, trachea, large airways). It is usually caused by a virus. Children in the age of 3 months to 5 to 6 years are most susceptible to it. Moreover, it is more common in boys than girls.

Because the symptoms resemble those of diphtheria - the real croup - the name pseudo-croup has arisen.

Diagnosis
Diagnosis is made on the basis of the symptoms. During his examination, the physician will mainly want to exclude a potentially life-threatening inflammation of the throat (epiglottitis).

A child may also experience symptoms similar to pseudo-croup or epiglottis if an object is trapped in the larynx, trachea or chest. Often this is also an obvious explanation if suddenly there are signs of a child who seemed completely fine a few minutes earlier. This can be prevented by never letting your child play with small objects. Always ensure that there are no dangerous objects within reach of your child.

Your child can also choke on, for example, food. If this happens, you have to do the following.

Therapy
Usually the treatment can take place at home. If your child has symptoms similar to those of pseudo-croup, you can do a number of things. In the first instance, the most important thing is that the child is reassured. So don't panic and put the child at ease by staying with him during the attack. The idea that the swelling in the throat can be reduced by humid air has not been confirmed by recent research. The advice to sit with the child in the bathroom while the hot tap is running from a shower or bath should be considered outdated. Nevertheless, you can still try it if you think your child will benefit. Drinking warm water can dissolve the mucus in the airways a little, which may further relieve the symptoms.

Medication and hospital
The doctor can prescribe medication to the child that dilate the airways. This makes breathing easier. They are often administered via a nebulizer. This is a tool that forms a fine mist with the medicine in it. The child breathes the mist through a mask. In this way, the medication ends up exactly where it is needed.

Sometimes a hospitalization takes place and corticosteroids (anti-inflammatories) are given to reduce the swelling.

In most cases, however, the disease will pass over within a few days. There are children who seem to develop pseudo-croup with every virus infection.

The condition of the skin of your child is often a good signifier of their health, and many symptoms of diseases show themselves upon it. Perhaps that rash is a disease, maybe heat rash or an allergy? In the guide below you will find a descripti......
(296830 x) Read more »