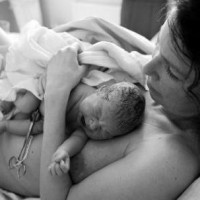 Normally, the baby is placed on the mother's belly immediately after birth. Soon after, the father also gets the opportunity to hold the baby for the first time. These are very important moments for both the baby and the parents and contribute to instant bonding between parents and baby.

Premature infants (who are not in an optimal condition or too small) are often taken quickly to the neonatology department. In a few cases the parents can hold the baby for a while, but usually not. After the baby has been transferred to neonatology, there is often little chance to hold the him. Because of this, normal parenting feelings can become confused. The lack of contact can even lead to emotional problems with the parents. It is sometimes difficult for the baby too. In the department, among other things, there is a lot of noise and light, this is not conducive to the normal development of the child.

Parents are given the opportunity to be with their child and to take care of it as much as possible. An important development is kangaroo (or pouching). The baby is placed on the bare chest of the father or mother for a while. To ensure direct skin contact between parents and child, the baby only has a diaper on.
The parent first takes a relaxed position on a chair or bed, after which the baby is put on their chest. Both are covered with a blanket. Because the temperature of the parent is sufficient to keep the baby warm, there is no risk of baby becoming too cold.

How long the parent can kangaroo with the child depends on may factors. Half an hour is a minimum, given that a lot of time can be taken setting things up. In babies who are connected with many instruments and devices, the kangaroo method is a bit cumbersome, because it can easily take ten minutes before the baby is settled. How long the baby will remain depends on the baby, but also on the parent's endurance. As soon as the baby becomes more independent and can also be handled more easily, parent and child can more often kangaroo.
When baby first settles on his parent's chest he may be overly alert. After a while the baby falls asleep relaxed and has a regular and deep breathing.

The benefits of pouching: