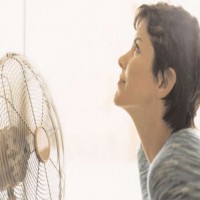 The menopause is the period in which your ovarian cycle and menstruation gradually stop.

Being overweight can cause an earlier than normal menopause.

On average, menstruation stops around the age of 51, usually between 46 and 57 years.

In about 10% of American women, menstruation stops before the 45th birthday. This is called 'early menopause' and it is then referred to as 'premature ovarian aging'. The transition starts about 5 to 6 years before the menopause. This is called the premenopause. Many women suffer from various complaints such as hot flushes, fatigue, irregular menstruation and reduced or more severe bleeding during this period.

In a very small group of women, roughly 1 to 2%, menstruation stops before her 40th. This is called 'Premature Ovarian Failure' (POF). The cause of this is still unknown in most situations. Sometimes it can be related to a chromosomal abnormality, or chemotherapy that the woman has undergone.

The entire period from the premenopause to the moment that your hormones are in balance again (post-menopause) is called the change. The change can last between 5 and 10 years, depending on the woman.

Early menopause and pregnancy
The fertility of women is at its highest around the 20th to the 22nd year. Around 35 years this is still about 50% of what it was around 20 years. At 40 years of age this falls to only 10%. The chance of a miscarriage, a multiple birth or a child with a disorder also increases as you get older.

If your mother had an early menopause it may be worth speaking with your GP or gynecologist. It may be worth having children first and then concentrating on your career, as there is limited time on children but not work.