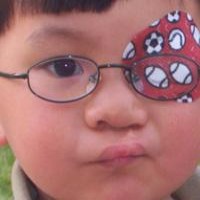 Ambylopia is a poor vision in one eye. This is caused by the fact that the eye has not been able to develop normally in early childhood. It's called "lazy eye" when one eye develops good vision while the other eye does not. The eye with the worse visual acuity is called the lazy eye. The abnormality is fairly common, with 4 out of 100 adults. Usually only 1 out of 2 eyes is lazy, but a lazy eye can also occur on both sides in rare cases.

Ambylopia can only be successfully treated during early childhood and therefore it is very important that this abnormality is discovered early. If the family has strabismus, strong spectacle lenses, lazy eyes or other ophthalmological abnormalities, it is advisable to pass this on to the consultation office or the pediatrician.

The diagnosis
The diagnosis can be made by demonstrating a clear difference in the visual acuity between both eyes. This is difficult for young children. The child himself is often unaware of it. If the child does not look cross-eyed, nothing will stand out to the parent.

Further research is then necessary. An investigation then follows where a couple of pupil dilating drops are dripped into the eyes. The refractive state of the eyes can be determined by these drops. Also the brightness of the cornea, the lens and the condition of the retina is assessed by the ophthalmologist.

Sometimes it is not possible to treat a lazy eye with masking. In that case pupil-dilating drops are sometimes given in the good eye. This has the purpose that this eye can not be used for looking up close. This way the lazy eye is forced to focus up close.

In some cases, surgical intervention is necessary to correct the position of the eyes.

The condition of the skin of your child is often a good signifier of their health, and many symptoms of diseases show themselves upon it. Perhaps that rash is a disease, maybe heat rash or an allergy? In the guide below you will find a descripti......
(296830 x) Read more »