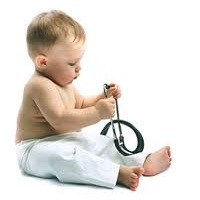 There is a difference between congenital and hereditary disorders, and sometimes it is confusing what condition is involved. Both are already present at birth. A hereditary predisposition is often only expressed later (eg baldness). A birthmark that someone is born with is not inherited, but is immediately visible at birth, which is congenital.

If a mother develops a disease during pregnancy, the development of the baby can be seriously disrupted. A child may then be born who, as a result, may have an congenital (but not hereditary) deviation. Sometimes the damage is limited, but in some very serious cases, a child unfortunately only lives for a short time. Hereditary diseases are caused by our genes - these are predetermined and that can not be influenced by external factors.

Hereditary disorders
An inherited condition is caused by a mutation in the genes, the genetic material. The hereditary material consists of gene pairs that come from the mother and the father. Regularly a disorder occurs in one part of the gene pair. The parents are not even aware of that, because they have never experienced any complaints themselves. A disorder in a part of the gene pair is not always a cause for the development of a disease, but can lead to disease if one strongly abnormal gene appears to be dominant or if two recessive (non-dominant) genes turn out to be abnormal at the same time. If this leads to a disorder, we speak respectively of dominant or recessive hereditary disorders. Examples of a dominant hereditary condition are Huntington's disease and hypercholesterolemia. Examples of recessive hereditary disorders are schisis, cystic fibrosis, sickle cell disease and thalassemia. Are you from Morocco or Turkey, the Middle East, Africa, Surinam, the Antilles and the Caribbean, Africa or Asia? Then your (future) child runs a higher risk of hereditary anemia. You can be a carrier of this without you noticing it. Carriage of hereditary anemia occurs in 1 out of 20 people (5%) throughout the world. The most common forms of hereditary anemia are sickle cell anemia and thalassemia.

A hereditary condition can arise through inheritance of the parents, but can also arise spontaneously. An example of the latter is Down's syndrome, which for the most part is caused by new changes in the genetic material. These changes (mutations) can arise by chance or by external factors. The new mutation can then be transferred to the next generation.

A hereditary condition is always inherent. This does not mean that such a condition is noticeable or visible immediately at birth. Some disorders appear later in life. Examples include hereditary anemia (hemoglobinopathies), certain muscle diseases and certain forms of Diabetes Mellitus.

A number of congenital abnormalities can nowadays be demonstrated in the first half of the pregnancy, for example chromosomal abnormalities. Genetic research is done at the Clinical Genetics departments of academic hospitals. There, hereditary (genetic) diseases and disorders are examined. The research is done to find out if someone has a hereditary disorder or the predisposition to it, or is a carrier of a disorder.

The condition of the skin of your child is often a good signifier of their health, and many symptoms of diseases show themselves upon it. Perhaps that rash is a disease, maybe heat rash or an allergy? In the guide below you will find a descripti......
(297445 x) Read more »