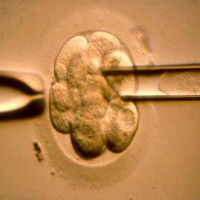 IUI: Intra-uterine insemination ("in utero fertilization"): Fertilization of the egg cell while it is in the uterus.

Normally, there is 1 ovum in a spontaneous cycle. By administering hormones, the ovaries are stimulated to mature more than 1 follicle, so that several egg cells are obtained during the follicle aspiration. After fertilization in the laboratory, one or two embryos will be placed in the uterus, increasing the chance of a pregnancy.

How does stimulation take place?
The stimulation usually takes place by administration of Gonal-F, through daily subcutaneous injections. The duration of the stimulation is determined by the way the woman responds to the medication. On average, the stimulation phase lasts between 8 and 14 days. The response to hormone stimulation is examined in two ways. The first way is with the transvaginal ultrasound, from cycle day 8 to 9 the growth of the follicles is studied. The second way is through hormone measurements in the blood, if necessary blood will be taken from cycle day 9 and thus the level of the hormone estradiol is measured. If it turns out that the follicles are between 18 and 22 mm and the hormone level of the oestradiol in the blood has risen sufficiently, the stimulation is completed with the administration of Pregnyl, this is the last maturation phase set in motion. The harvest takes place no later than 36 hours after the administration of this injection. The harvesting is an outpatient procedure and usually takes place under local anesthesia. The woman receives medication to calm down and an injection as pain relief. The procedure can last up to about half an hour. Afterwards, the woman should remain in hospital for half an hour. The man will also provide a sperm sample, which will be processed.

After oocytes have been obtained, they are brought together with the semen that has been pretreated. After 2 days it will be known whether fertilization has taken place and whether the development of the embryos is going well. If this is the case, 1 or 2 embryos will be placed 2 or 3 days after the puncture. This placement is a short-term outpatient procedure, no anesthesia is needed. By inserting a speculum into the vagina, the cervix is ​​reached. A thin plastic tube is inserted into the cervix and 1 or 2 embryos are placed in the uterus. The woman stays still for fifteen minutes to half an hour before she can leave the hospital. Before the woman goes home, she will be given Progestan capsules.  These capsules help the uterine lining to prepare an implant.

ICSI
The course of this treatment is the same as for an IVF treatment. However, in an ICSI treatment, the egg cells, which after hormonal stimulation have been obtained in the follicle aspiration, are injected one by one separately with a sperm cell when they are in the right stage of maturation. Using an extremely thin needle, a sperm cell is injected into an egg cell. This method leads to an embryo in about half of the oocytes. These embryos have the same possibilities to develop as embryos that have come about in an IVF procedure.

MESA-ICSI and PESA-ICSI
MESA: microsurgical epididymal sperm aspiration
PESA: percutaneous epididymal sperm aspiration
These treatments are almost identical to an IVF or ICSI, but the sperm cells are obtained in a different way. MESA is a procedure that, under general anesthesia, is performed by a urologist using a microscope. Since it is a difficult technique,  PESA is used in many centers. PESA is cheaper and simpler for the urologist and more pleasant for the patient, since the treatment can be done on an outpatient basis, under local anesthesia. After anesthesia has been sprayed around the area, a needle is inserted into the epididymis and sperm is retrieved. The lab technician of the fertility laboratory is present during this treatment and assesses the obtained seed on site using a microscope. It must be determined whether there are sufficient motile sperm cells available. If this is not the case, the process can be performed again. If enough seed has been obtained, an attempt is made to freeze it, which will succeed in about 60% of the cases.

Who are eligible for MESA or PESA?
Men where no sperm cell is found in the ejaculation due to a blockage in the drainage system, are eligible for a MESA or PESA treatment. The seed production must be normal. The blockage in the drainage system may be congenital, but sometimes this has developed later in life after an accident or infection. A failed recovery operation after sterilization may have the same effect, but sometimes no apparent cause is found. By means of a questionnaire an attempt is made to find out whether there is an explanation (for example an operation or infection in the past), physical examination done (the testicles must be a normal size) and blood has been taken for hormone determination.

Treatment: Just as with IVF and ICSI treatment, stimulation of the ovaries is started. When these are large enough, the oocytes are sucked up during the follicle puncture and taken to the laboratory. So far everything is the same as with the IVF or ICSI. The laboratory phase is partly different. The oocytes obtained are injected according to the ICSI procedure with sperm cells obtained by MESA or PESA. The seed frozen in straws is thawed and the sperm cells are assessed for quality. If there are no usable sperm cells, a so-called acute MESA or PESA is still performed. In other words: immediately after the follicle puncture of the woman, the man must also be treated again. This procedure is also followed if seed that was mobile at the earlier MESA or PESA was found but was of insufficient quality to be frozen. 2 to 5 days after the puncture, 1 or 2 embryos are placed in the uterus.

PCOS
In PCOS (Poly Cystic Ovarian Syndrome) the values ​​of different hormones are increased. The value of the FSH, the hormone that causes the eggs to ripen, is insufficient. In PCOS, ovulation, and thus also menstruation, continues for longer periods and fertility decreases. PCOS often goes hand in hand with obesity. Treatment is necessary to induce ovulation in order to increase the chance of pregnancy, and can be done by means of weight loss, tablets, injections or a surgery. Losing weight often leads to the spontaneous occurrence of ovulation. Clomiphene citrate (Clomid) is recommended as the first medical treatment. After a (spontaneous or medicated) menstruation you take one or more tablets, from the third to the seventh or from the fifth to the ninth day of the cycle. Ovulation occurs between about the thirteenth and twenty-first cycle days. The entire cycle then does not last longer than 35 days. Treating can also be done with Gonadotropin. In this treatment, the woman receives injections of follicle stimulating hormone (FSH) (made in the laboratory, rFSH) or with Human Menopausal Gonadotropin (HMG made from the urine of women who have had the transition) for several days. On the third day of the cycle, the woman starts with the subcutaneous injections. The cycle is followed with ultrasound controls; therefore, multiple appointments must be taken into account. If the ultrasound scan shows that it is necessary, the doctor adjusts the dose. If a maximum of three egg vesicles are sufficiently mature, the woman receives an injection with human chorionic gonadotropin (HCG) to initiate ovulation. This injection is also subcutaneous. Ovulation takes place approximately 38-40 hours after this injection. The released egg is fertile for 8-12 hours. Sperm cells are viable for about 48-72 hours. It is therefore wise to have a community within about 12 to 36 hours after the HCG injection. Multiple treatments are possible, but some are still in a research phase.

Donor sperm insemination
In case of a KID treatment, donor sperm is inserted into the woman (inseminated). The chance of a pregnancy is greatest if the insemination takes place just before ovulation, so it is important to follow the woman's cycle well. The insertion of the sperm is usually painless. There are some ways in which this sperm can be inseminated. It is possible to apply this method yourself. However, if the mucus of the cervix is ​​too tough or too acidic, or if there are antibodies against sperm cells, it is inseminated in the uterus itself (intrauterine insemination, IUI). It is necessary that the semen is processed in the laboratory to simulate, as it were, the filtering property of the cervix. Often the gynecologist prescribes hormone preparations at IUI to maximize the chances and to better manage the planning of the insemination. Both at AI and at IUI, the fertilization of the egg cell and implantation of an embryo takes place in a natural way.

The condition of the skin of your child is often a good signifier of their health, and many symptoms of diseases show themselves upon it. Perhaps that rash is a disease, maybe heat rash or an allergy? In the guide below you will find a descripti......
(295630 x) Read more »