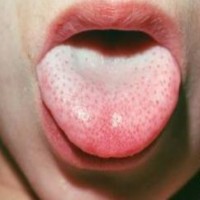 Scarlet fever usually occurs in children from three to six years, and to a lesser degree in adults. It is caused by a bacterium (streptococcus). In the past, it cause a lot of suffering and was a serious illness. Nowadays it is less common and is less serious.

Symptoms
Scarlet fever begins suddenly with loss of appetite, sore throat, fasting fever (sometimes up to 40 degrees) and painful throat glands. Your child may vomit or have a stomach ache. The tongue is first white and after three days red, thick and bumpy (raspberry tongue). Thereafter a red, rough rash raises on the chest. The rash spreads throughout the body, especially to the armpits and the. The skin around the mouth remains pale. After two to three weeks the skin can swell, especially on the hands and feet. The fever falls within three to five days. The rash disappears a few days later.

Contagious?
Scarlet fever is not so contagious. The bacterium is transmitted in the air mainly through coughing or talking through droplets. After infection with the bacterium it takes two to seven days before disease symptoms occur. Scarlet fever is contagious during the first ten days. In the case of antibiotics, the disease is no longer contagious after two days. People who carry the red-spotted bacteria can transmit the disease while they themselves only have throat pain or are not even sick.

Therapy
Give your child enough rest and give them plenty of fluids. If your child feels well enough, after recovery or after treating with antibiotics, it may go back to school. If your child feels ill or has a lot of pain, you can give a child's paracetamol. After half an hour it should be a lot better. If an infected child is very ill, it receives antibiotics via the GP. There is no vaccine (vaccination) against scarlet fever. On average, within a week to ten days, it will pass. The disease can come back later, but usually less seriously.

The condition of the skin of your child is often a good signifier of their health, and many symptoms of diseases show themselves upon it. Perhaps that rash is a disease, maybe heat rash or an allergy? In the guide below you will find a descripti......
(296598 x) Read more »