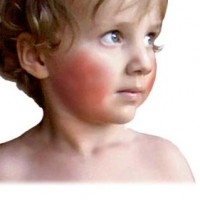 Fifth disease is generally a mild illness caused by the Parvo B19 virus and occurs mainly in children in the spring.

Transmission
The virus spreads in the air by talking, coughing and sneezing. When these droplets are inhaled, someone can become infected. Someone who has the fifth disease can infect other people from 1 week before the symptoms appear until the skin rash occurs. Not everyone gets sick after infection with the virus. When disease symptoms occur they appear 1 to 3 weeks after the infection. The fifth disease is not very contagious. It is mainly transferred through intensive or long-term contact, for example in a family, crèche, day-care center, playgroup or school.

Extra risk in pregnant women
Anyone who has not had the fifth disease can become infected and become ill. Most adults have already had the disease as a child. If a woman develops the disease in the first half of the pregnancy, this can have adverse consequences for the unborn baby. There is a small chance (about 9 percent) of a miscarriage or a stillborn baby. Usually the pregnancy is normal and the baby is unaffected. A pregnant woman whose family member has the fifth disease should contact the doctor. This also applies if there is a suspicion that the woman is infected with the virus.

The child is already contagious before it is sick and can therefore, if it feels alright, just go to school, crèche, playgroup, etc. It is possible that the child has already infected other children anyway. It is advisable to inform the management of the school. They can inform other parents, so that they can be alert to symptoms of the fifth disease in their child (ren) or in case of a possible pregnancy.