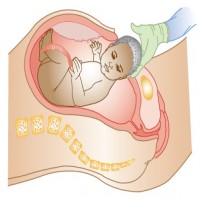 For many women, it is a disappointment when they hear that a caesarean is necessary. You have to go to the hospital and that can be a let-down if you would like to give birth at home. When a Caesarean section is performed, the baby will enter the world via the abdominal wall. In general, this operation lasts for 3 quarters of an hour, it can take a bit longer (in case of complications) or slightly shorter (in an emergency). Usually the baby will come into the world within 15 minutes after the operation has started. After the birth of the baby, the doctor closes the uterus again, as well as the different layers of the abdominal wall.

Reasons for a cesarean section
Caesarean sections can cause complications, therefore it will only be performed if there is a good reason for it. Such as:

A planned caesarean section
Sometimes it is clear before pregnancy or delivery that once the big moment is there, you have to give birth by means of a Caesarean section. This may be if you have ever had surgery in connection with a severe prolapse of the uterus. In other cases, it may be that caesarean section is needed during pregnancy, for example if the placenta lies in front of the cervix, if there are complications, such as an insufficiently functioning placenta, or if there is an obstruction and the baby cannot position itself properly.

A caesarean section during the delivery
A secondary Caesarean section is performed when it appears during the delivery that it has become necessary. The most common reasons are that the delivery is not progressing or the baby is suffering from oxygen deprivation. There may be severely insufficient dilation of the cervix. When heart rate recording on a CTG (cardiotocogram) deviates too long or severely, this may be a sign of imminent oxygen deprivation in the baby. In many cases, some blood is then removed from the baby's scalp to determine whether the baby is still receiving sufficient oxygen. This test is called a micro blood test.

Preparation
A Caesarean section is an operation and for every operation there must first be physical examinations and checks of the patient's health. A blood test is done and it is discussed what anesthesia you get; general or epidural. Which of the two methods is recommended depends, among other things, on the reason for the caesarean section, the degree of urgency, and the hospital policy. Often the nurse partially shaves the pubic hair. You will receive an operating shirt on the ward. You will be taken to the operating department shortly before the operation. You may not have jewelry, hairpins or make-up; you should remove contact lenses or dentures. The bladder must be empty, so a nurse will apply a bladder catheter so that the urine can drain, which is collected in a bag. When it comes to a caesarean section during delivery or emergency Cesarean section, the most necessary preparations are made at a rapid pace. You may have to drink a liquid to neutralize the stomach acid. It may be so urgent that none of the secondary preparations take place - you may still have your makeup, jewellery, and own clothes on.

Sedation
As mentioned, there is a choice of 2 types of anesthesia. A general anesthetic or an epidural. If a general anaesthetic is elected, it is given in such a way that the baby receives as little as possible of the medication, such as sleeping pills and analgesia via the placenta. The medication for the anaesthetic is administered via an infusion. While you are under anaesthesia, you have a tube in the trachea for respiration. You do not feel pain and you are only woken up when the whole caesarean section is over, so when the baby is born and placenta removed.

With an epidural, the anesthetist injects an anesthetic fluid between the vertebrae. Often the skin is locally anesthetized. The epidural itself will barely be felt. After the anesthetic liquid has been injected, your lower body and legs will quickly become numb. Occasionally you may be sick for a short time, this is due to a fall in blood pressure. A big advantage of an epidural is that you consciously experience the birth of your baby. You also have no pain during the operation, but you can feel that something is being pulled or pushed in your stomach. In rare cases, the anesthetic reaches a little higher than the lower body, so you can get the feeling that breathing becomes increasingly difficult. This does not hurt, and the anaesthesiologist will probably give you some oxygen through a mask, so that you can recover almost immediately.

The caesarean section
In principle, the partner may be present at the caesarean section, but he will only come in when all preparations have been made, so just before the start of the operation. The gynecologist almost always makes a horizontal cut (bikini cut) of 10 to 15 cm, just above the pubic hair. Sometimes there is an exception and a cut under the navel is made downwards. After the cut in the skin, the fat under the skin and a layer of connective tissue are cut above the abdominal muscles. The long abdominal muscles running down from the rib cage are pushed aside. Then the abdominal cavity is opened. The bladder lies partly over the uterus and is detached from the uterus. After this the gynecologist brings the baby outside, usually through a transverse cut in the womb. In an operation, everything must remain sterile, for that reason the father can not cut the umbilical cord of the baby. Right after cutting the umbilical cord, you usually get an antibiotic and a medicine to contract the uterus through the infusion. Once the placenta is out, the gynecologist begins re-attaching the uterus and the different layers of the abdominal wall.

Once baby is born
Usually the baby is examined by the pediatrician immediately after birth. When it concerns a planned caesarean section and in principle no problems are expected, the examination by the pediatrician can sometimes take place later. This is partly dependent on the reason for the caesarean section, the gestational age, the condition of the baby and the hospital policy, these also determine whether the baby is placed in an incubator or in an ordinary bed.

After the cesarean section
After cesarean sections, blood pressure, pulse, blood loss and urine levels are regularly monitored. You will receive fluid through a drip. With a spinal puncture you certainly do not have control over your legs for the first hours after the operation, this will gradually come back again. The bladder catheter feel rather strange, but it is usually removed one day after surgery. In some cases a wound drain is applied during the operation, this is a tube that can drain the excess blood. After 1 or 2 days, this drain is removed again. You will receive an injection once or twice a day with a blood thinning agent (heparin), this is to prevent thrombosis. The day after the operation some blood is usually taken to see if you have anemia. Sometimes you can lose so much blood that a blood transfusion is needed, fortunately this does not occur often. After a few days, the intestines start to work again. Shortly after the Caesarean section you often have pain in the wound and you may suffer from painful after-effects. Painkillers are given for this. The abdominal wall will be painful, not only at the level of the scar, but also higher, just about to the navel. This is because under the skin the cut in the abdominal wall runs vertically, from navel to pubic bone. Bonding generally uses material that dissolves by itself. Other stitches or staples are removed after about a week.

Home again
The further recovery of the cesarean section takes place at home. The time required for recovery is often longer than after a vaginal delivery. Not only are you a mother, you also have to recover from an operation. A common complaint is fatigue, so rest as much as you can. Sometimes additional maternity care is reimbursed by your insurance. Home help can be pleasant in a busy household. After the first few weeks you can gradually do more and more, heavy lifting you can certainly not do the first 6 weeks. If there is some blood or fluid coming out of the wound, it is best to rinse it in the shower, dry it carefully and put a dry gauze over it, to protect clothing. With abdominal exercises you can start 6 to 8 weeks after cesarean section again, the different layers of the abdominal wall are usually healed by then. On the side of the scar, you may sometimes have a pulling feeling of internal stitches during the first time. You may have a numb feeling around the scar for a long time, because the nerves in the abdominal wall are cut. Above this area with a numbness, there is often an area that is extra sensitive halfway through the navel. It can take 6 to 12 months for the feeling in the abdominal wall to be completely normal again.

A gynecologist can advise you best when you may become pregnant again. Whether a caesarean will be needed again next time depends on the reason for this Caesarean section. This can all be discussed at the follow-up. Often a caesarean is not necessary for a next child, but you will be advised to give birth in the hospital.

The condition of the skin of your child is often a good signifier of their health, and many symptoms of diseases show themselves upon it. Perhaps that rash is a disease, maybe heat rash or an allergy? In the guide below you will find a descripti......
(297209 x) Read more »