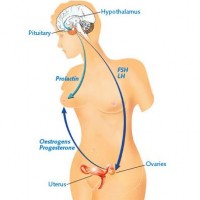 If you do not breast-feed your baby, your period will return after about five to eight weeks. In the beginning, menstruation can be irregular, so the second menstruation can take longer than before your pregnancy. Ovulation can return before menstruation, make sure you take your contraceptives.

Breastfeeding and your period
Breastfeeding delays the first post-delivery menstruation. This can be a few months, but it can also postpone it for a year or more. Sometimes menstruation returns at long intervals. For example, it may be that your second menstruation only comes through after two or three months. The duration of the cycle can also differ from that for the pregnancy.

When does menstruation return?
It depends on several factors. First, it differs from woman to woman. A second factor is whether you are breast-feeding or not. The longer and more regularly you breastfeed, the longer the menstruation is delayed. As soon as you stop breastfeeding, the hormones that stop menstruation are made to a much lesser extent and you will soon be on time.

The end of breastfeeding?
Menstruation does not mean that you have to stop breastfeeding. Your milk still has great nutritional value for your baby, even during menstruation. The amount of milk you produce during your period may be a little less, but will return to the normal amount after the period. The milk can also taste slightly different during menstruation. Maybe your baby will not like it as much as normal. And your nipples can also be more sensitive for a few days, but this too will pass.