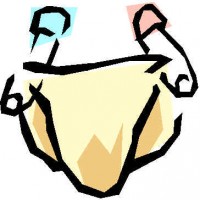 Checking the diapers is a good way to see if your child is getting enough food. In addition, it is of course always important to also pay attention to other factors such as growth, weight and behavior.

Urine
You often read that a baby who is breastfeeding will have four to six soaked diapers per day. The urine should be clear, odorless and light in color. Only the first three days after birth can the number of wet diapers be less. Colostrum, the mother's milk during the first days, is a very nutritious and concentrated diet, but it contains little water, resulting in fewer urinations. It is therefore best to expect your child to have one wet diaper on the first day and only two wet diapers on the second day. Nothing to worry about! From day four onwards, however, your child should produce four to six urinations  every day.

Stairway
The first days a baby's poop is known as meconium, which is tarry and dark green to black in color. By the third day the stool becomes lighter in color, which means that the colostrum (the first yellowish syrupy milk) turns into the more mature mother's milk.

The feces of a breast-fed baby is often very watery liquid. The stool is then usually (mustard) yellow in color, although other shades may also occur. It is not uncommon when it appears that there are 'nuts and seeds' in the stool. When a child starts to eat and drink other things, or gets strongly colored foods or supplements, the color and substance of the stool can change.

For the first four to six weeks, a child normally has stools every day. Some children have stains in every diaper, where others have a 'full' diaper one or more times a day. Decreasing faeces during the first weeks may indicate too little milk intake. Because the average amount of fat in the breast milk increases when the breasts are emptied more fully, a child who drinks the breast well will drink more fat. And fat works as a laxative and soothes the intestines and the digestive system! When a child does not produce feces for 7 days, it should be seen the same day by a lactation consultant. There is nothing to be worried about, but it is better to have it checked.

The stool pattern can change from four to six weeks. Some children continue to produce stool every day, where others can without problems for a few days to more than a week.
In case of doubt about the health of your child and for abnormal stools that can not be explained, always seek medical advice if in doubt.