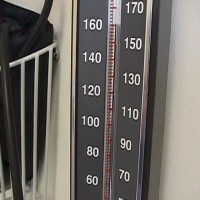 Pregnancy hypertension (or pre-eclampsia, pregnancy poisoning or toxicosis) is a condition that usually occurs after the 20th week of pregnancy. The disorder is due to elevated blood pressure in combination with high protein loss through the urine. The protein loss, in turn, leads to moisture accumulation.

Pre-eclampsia can affect the placenta, kidney, liver and brain. If pre-eclampsia is accompanied by an epileptic attack it is called eclampsia. Light pre-eclampsia easily treated. However, if the condition is not treated, it can exacerbate to severe pre-eclampsia or eclampsia. This can be life-threatening to mother and child.

There is no treatment that can prevent or cure pre-eclampsia. If you show signs of pre-eclampsia, you will be closely monitored by your doctor so that related problems can be avoided. The only way to cure pregnancy hypertension is the birth itself.

Increased risk
Who has a greater chance of pre-eclampsia?

How do you know if you have pre-eclampsia?
Unfortunately, there is no simple test that can say if you have or will have pre-eclampsia. The main symptoms are increased blood pressure and protein in the urine (proteinuria). Other symptoms that occur in pre-eclampsia may be persistent headaches, sensitivity to light, abdominal pain or blurred vision.
However, these symptoms can also occur in healthy pregnancies. Regular checks with your doctor are the best way to detect and / or treat this disorder in time.

Hellp-syndroom
Occasionally, pre-eclampsia may cause HELLP syndrome. In other cases, HELLP suddenly develops during healthy pregnancy. The critical period is up to 48 hours after childbirth. Thirty percent of HELLP patients get the condition during labour, but usually in the first 2 but sometimes even up to 8 days after childbirth. HELLP syndrome indicates that the red blood cells are damaged, liver function is disturbed and there is a lack of platelets, which causes blood clotting to be disregarded. HELLP syndrome is one of the most serious forms of pre-eclampsia and can be life-threatening for mother and child. The letters in HELLP represent:
Hemolysis (red blood cell demolition)
Elevated Liver Enzymes (Elevated Liver enzymes)
Low Platelets (decreased platelet count)

More research is necessary to be able to say with certainty what long-term health effects are, and to find better methods that can detect and treat this condition.

The condition of the skin of your child is often a good signifier of their health, and many symptoms of diseases show themselves upon it. Perhaps that rash is a disease, maybe heat rash or an allergy? In the guide below you will find a descripti......
(295854 x) Read more »